Unlike other planets in the solar system, the sun provides earth with just the right amount of sunlight to support life. In fact, the earth intercepts 173,000 terawatts (trillions of watts) of sunlight every day. In terms of solar energy, that’s 10,000 times more power than the planet’s current population uses! With that amount of energy reaching the earth on a daily basis, is it possible for our planet to be powered by all solar energy one day? As of today, two main types of methods are used to transform the sun’s power into electricity: 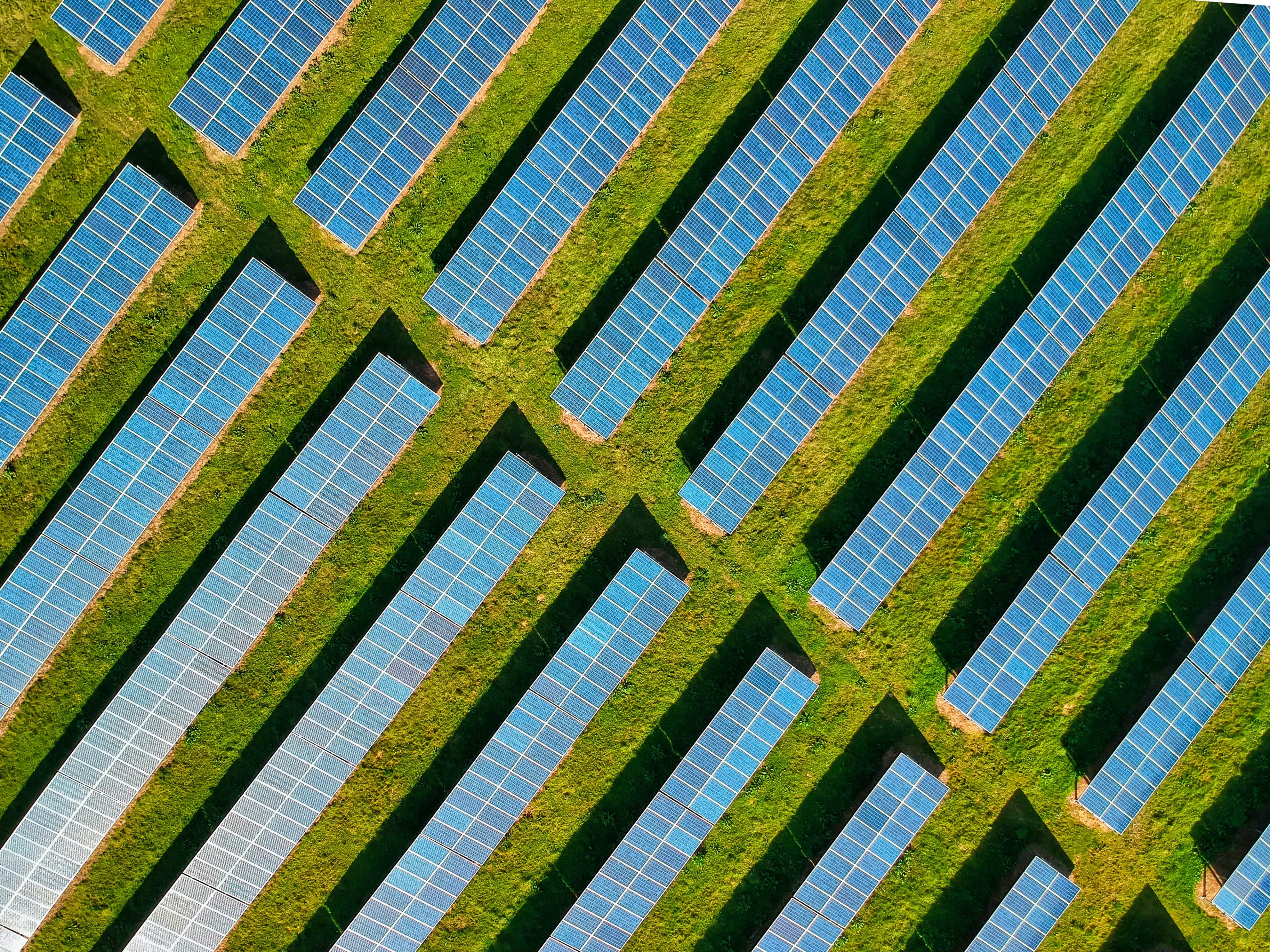 The earth intercepts 173,000 terawatts (trillions of watts) of solar power every day.

How do solar PV modules work?

Solar modules are made up of several solar cells, which are typically made from silicon. These solar cells take in sunlight and transform it into direct current (DC) that then gets converted into the alternating current (AC). This is the electricity that is used to power homes and businesses. But the technology to take advantage of the sun’s power doesn’t end there.

What is solar thermal energy?

Low-temperature plates generate heat that stays below 110°F (43°C). This method is more likely to be used for residential amenities like heating a pool.

These flat plates range from 212°F-482°F (100°-250°C). Medium-temperature plates are used more in commercial settings, some of which their applications include pumping irrigation water or to remove excess salts or minerals from water.

This method requires large mirrors or lenses in order to concentrate the sun’s heat to reach high temperatures - up to 572°F (300°C). This heat is used to excite a transfer fluid like gas to then heat water to produce steam. The steam powers a turbine to generate electricity.

Is an all solar energy economy possible?

The Transition to 100% Renewable Energy

A recent examination of U.S. Climate Alliance (USCA) states conducted by the Union of Concerned Scientists (UCS) and environmental justice groups COPAL in Minnesota, GreenRoots in Massachusetts, and the Michigan Environmental Justice Coalition, found that with more ambitious green-energy goals, it’s possible for states to meet 100 percent of their renewable energy needs by the year 2035. While 2035 might seem to be in the not-so-distant future, this ambitious goal isn’t a stretch when you consider the growing number of states who are already committed to 100 percent renewable or carbon-free energy.

In their proposed revamp of 100 percent renewable energy by 2035, their research found that coal generation basically disappears by the year 2040 and all solar energy grows almost ninefold in USCA states: 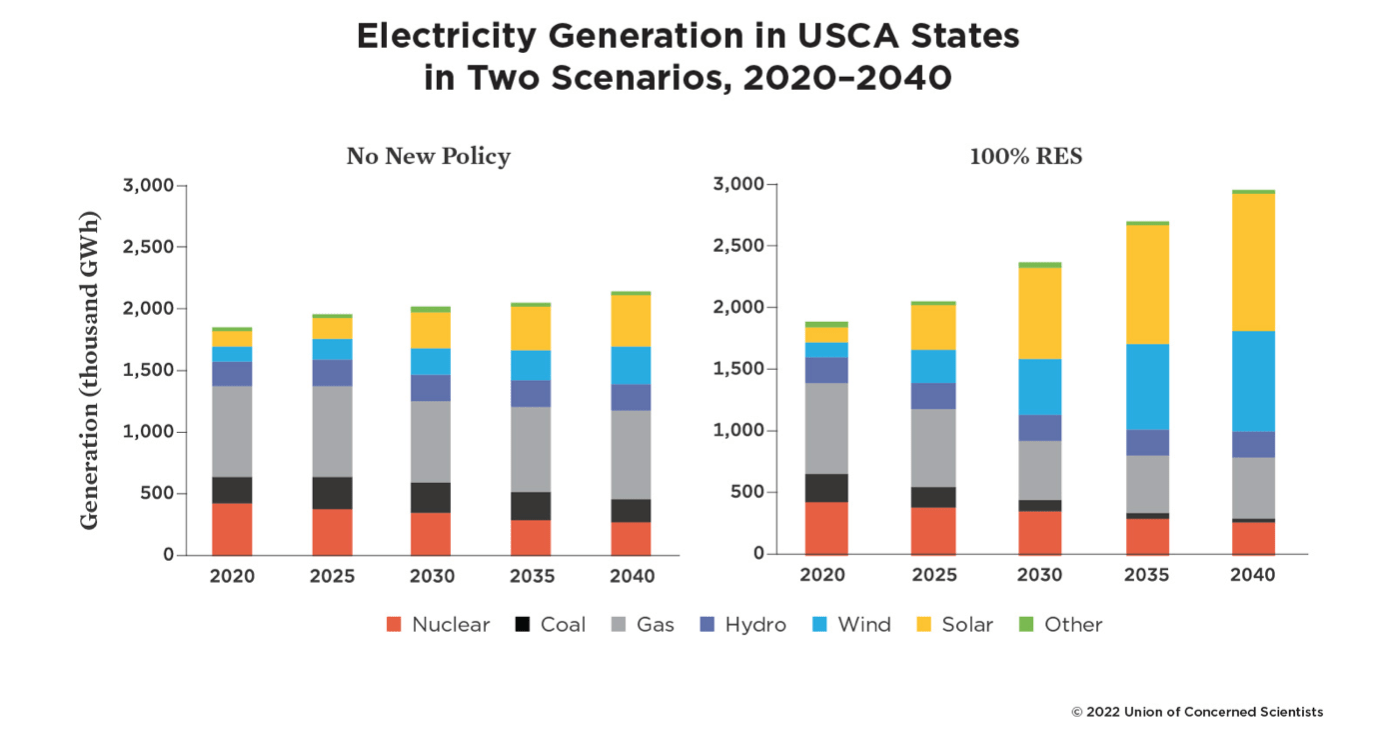 The Importance of Transitioning to 100% Renewable Energy

To put our money where our mouth is, a healthy population is valued at a whopping $280 billion back into the economy over the next two decades.

More than simply cleaning up the grid, the switch to 100 percent renewable energy will produce cleaner air, better health conditions and create jobs.

Better Air Quality for All

In UCS’ et al. new 100% RES model, not only did they find a significant reduction in the reliance on harmful fossil fuels, but they showed how that reduction directly impacts air quality. For example, they found that states who adopt the strengthened plan can lower their sulfur dioxide (SO2) and nitrogen oxides (NOx) from power plant pollution by 88% and 77% respectively by 2040. What’s more, carbon dioxide (CO2) pollution would drop 58% of their 2020 levels by 2040.

In terms of health, the benefits of an accelerated plan to 100% renewable energy is a no brainer. Their study concluded that from 2022 to 2040 we would experience up to 13,000 fewer premature deaths, 140,000 fewer asthma attacks and 700,000 fewer missed work days because of sickness. To put our money where our mouth is, a healthy population is valued at a whopping $280 billion back into the economy over the next two decades.

With an economy in the midst of rebounding from a recent pandemic, new job creation is vital. In an all green-energy economy by 2040, the wind and solar industries would be responsible for the creation of hundreds of thousands of new jobs.

A Green Future is Possible

While an all solar energy future isn’t in the plans right now, an all renewable energy future certainly is. By strengthening the current initiatives in place and making sure clean energy is top of mind, we can eliminate our need for fossil fuels, improve our country’s air quality - in turn reaping excellent health benefits - and create clean energy jobs for an economy that desperately needs it. Not only do these important changes improve the lives of future generations, but it can make a significant impact on the very near future of tomorrow.

- While solar energy is a leading clean energy source, a future reliant on 100% solar energy isn't feasible yet.
- However, current research suggests that a future reliant on 100% renewable energy is possible sooner than we think with strengthened efforts.
- Bolstering current green energy initiatives and making the transition to 100% clean energy a priority will reap amazing benefits in terns of environmental effects, overall health of the U.S. population, and job creation.

The Dangers of Floating Neutral

Why is my electric bill so high with solar panels?

Are solar panels worth it in Texas?