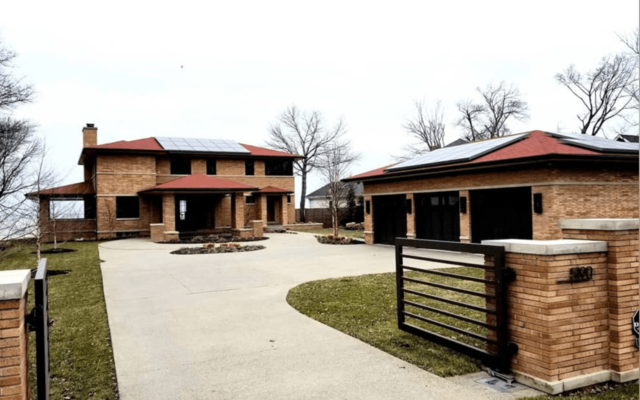 Homeowners in upstate New York are accustomed to enduring freezing, windy winters and it’s hard to find one without a solid plan for dealing with the season’s inevitable power outages. For Buffalo homeowner “David,” sustainable readiness is more of a lifestyle than a seasonal plan.

Motivated by climate change and a desire to reduce energy waste, in 2016 he finished construction on a new home complete with the latest energy efficient systems, including geothermal for heating and cooling and two charging stations for his EVs in the garage. He always planned to add solar and as a Tesla driver, he was aware of the Tesla Powerwall for energy storage but thought the price was too high for the return on investment.

In 2019, as energy storage became more price competitive, David decided to deepen his home’s resiliency with whole home backup. He also knew he wanted Tesla-brand batteries so that his integrated system including the Tesla EVs would work optimally. David was referred by a colleague to Solar Liberty, the largest solar energy installer in Western New York and across New York State, and certified installers of Tesla Powerwall systems.

All good, right? Not quite.

“I was concerned about the batteries and began to wonder, and frankly worry, what happens at 2am when the power goes out and my EVs are charging? Would they drain my Powerwalls? How would I deal with that?”

Solar Liberty designed the Lumin Energy Management Platform into the solar + energy storage system to take care of that problem through energy management. In “off grid mode,” Lumin  automatically sheds the largest loads during an outage to protect the battery from draining. In an outage, David can monitor his home’s energy consumption from an app on his phone and keep an eye on the battery, adding back loads as the charge allows by swiping circuits back on.

Two days after installation David had the chance for a real-world system test when the power went out at his home in Buffalo for the first time in nearly two years. Lumin went to work in off-grid mode, shedding the EVs and geothermal heat pump immediately. The load management system worked as designed and ten minutes later, the power was restored. The Lumin app then notified David that grid power was restored, Lumin had protected his battery when it mattered most, and normal household operations could resume.

David came to Solar Liberty very informed and knew exactly what he wanted. He had a vision for this project and how it would look and perform. The SunPower panels, Tesla Powerwall batteries, and Lumin Smart Panel combined for a very reliable and top of the line system. He didn’t sacrifice any quality or cut any corners with this project. He did it the right way and we were proud to deliver it and bolster his home’s energy efficiency and overall resiliency for years to come.